Sugar alcohols (or polyols) are generally what I tend to use a lot of the time as a sweetener. Sugar alcohols are all of the things that generally end in ‘-tol’, so: xylitol, erythritol, manitol, maltitol, sorbitol (which is often used to sweeten mints like Polos), etc.

Sugar alcohols tend to have, at a teaspoon-sized serving, far fewer calories than sugar. That’s because your body effectively processes most of the compound as fibre, so rather than being absorbed by your body, it pretty much goes straight through you. That’s why, in higher quantities (generally over 50g) they can have a laxative effect. However, that is compounded by the fact that a number of sugar alcohols also tend to absorb moisture, so they take your body’s moisture with them as they go, effectively ‘flushing’ straight through you. There is a school of thought that you can ‘train’ your body’s resistance to this effect, but I can’t vouch for that personally. 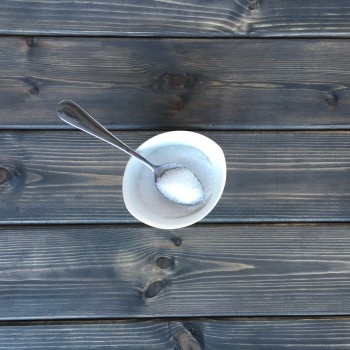 One of the most common sugar alcohols. Xylitol has a sweetness roughly the same as table sugar (I’d personally put…